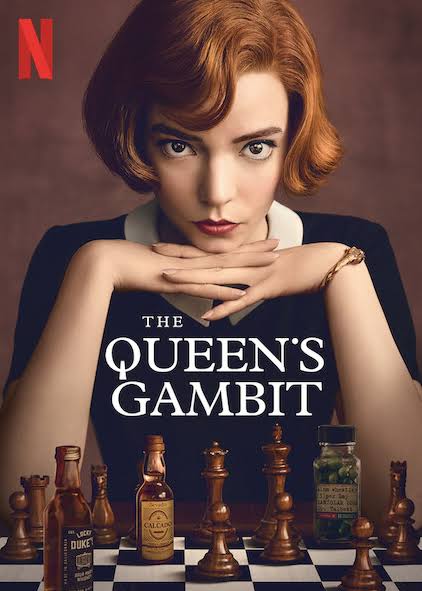 Elizabeth was adopted by the orphanage after her mums death at age 9.

The orphanage did its best to raise a harmonious child.

But she had subscribed to two interesting addictions.

She was addicted to tranquillizer and chess. And would do anything to experience both daily.

By the time she was a teenager, she had developed a qualitative relationship with the chess she learnt from the Janitor.

A man who used chess as his tranquillizer.

He needed to distract his boredom. While away time. Forget his sorrow. While she was desperate to bury her parental pain.

Pain introduced her to fame.

Elizabeth conquered every competitor she met.

She disrupted the patriarchal necklace designed to silence her voice.

The more ceilings she shattered the more unlikeable she became.

The young executive tried to be consumed by her obsession but her flustered adopted mum didn’t make it easier.

Alma was hooked on drugs and gulps.

The genius in Elizabeth couldn’t also stop her from attending to her addiction.

The more she strived. The more pills and booze she needed to consume.

News travelled around fast about the addicted genius.

The soul who will meet her ruin without an intervention.

Some of her buddies encouraged sobriety. While others nurtured the destructive desire. Maybe for their gain. After all, distraction fuels loss.

Her breaking point came after she lost both mothers.

She buried herself in destruction.

The Queen was drowning.

Thankfully, her friends dived in to save her.

The humans she competed against and destroyed at chess.

Till she became the world champion.

Announcing a change of name

One of the fundamentals BADLY BEHAVED people depend on is …

Once Upon a Time

Me are NOT ready to live in the society they are creating.