As professionals advocating for mental and emotional health care in Nigeria and Africa; it is important we take the responsibility to educate the teeming public who consume pornography on how their sexual fantasies and addiction can program them to become rapists.

Rape is a nonconsensual sexual penetration of a child, an adolescent or adult obtained by physical force, threat of bodily harm or when a victim is incapable of giving consent due to mental illness, retardation, or intoxication. As professionals in human behaviour space, it is important we share some evidence-based details on how pornography has contributed to the increase of rape epidemic in Nigeria.

According to the World Population Review in 2020, South Africa ranks number 1 in the world with 132.4 rape incidents and a survey conducted by the South African Medical Research Council in 2020 revealed that approximately one in four men surveyed admitted to committing rape.

As therapists, interviews with sex offenders in rehab shows clearly that the intention behind rape is to satisfy the urge for sex and secondarily demonstrate masculinity. This urge for sexual satisfaction is not the main problem, in this case, the brain of this offender had been trained over a period to satisfy a specific craving. With an eagle-eyed view, let’s view this phenomenon, rape, and the associated violence from a clinical context, relating it to addiction. 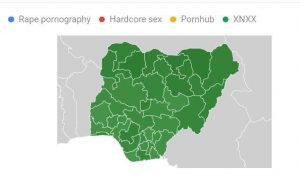 The human brain is plastic, and with every exposure, it gets trained with and/or without our
conscious participation. Research from numerous MRI scans and neuroimaging studies shows a significant change in the brain structure with every new learning. Addiction significantly changes the brain negatively in a way that impacts the prefrontal cortex responsible for planning and organizing behaviour; decreasing the prefrontal cortex’s ability to inhibit maladaptive behaviours.

According to J.R. Parkitna, dopamine surges are the barometer by which humans determine the value of any experience. It tells us what to approach or avoid, and where to focus our attention. Furthermore, dopamine tells one what to remember by rewiring the brain. As the brain becomes increasingly trained by the dopamine burst acquired from a genre of pornography, and in this case fetish, humiliation or hardcore, the brain is programmed to crave this type of reward (the dopamine burst associated with these genres) that is demonstrably detrimental to our wellbeing.

Interest in rape pornography and hardcore sex in Nigeria

“A woman was raped by two men. They were acting out the pornographic video game Custer’s Revenge. She was an American Indian; they were white. “They held her down and as one was running the tip of his knife across her face and throat he said, ‘Do you want to play Custer’s Last Stand? It’s great. You lose but you don’t care, do you? You like a little pain, don’t you’ They both laughed and then he said, you should be grateful, that all-American boys like us want you. Maybe we will tie you to a tree and start a fire around you.’

Her name is Jayne Stamen. She is currently in jail

Jayne Stamen. She is currently in jail. In 1986, she hired three men to beat up her husband. She wanted him to know what a beating felt like. He died. She was charged with second-degree murder convicted of first-degree manslaughter; sentenced to eight-and-a-half to twenty-five years. The sentences are to run consecutively. She was tortured in her marriage by a man consumed by acting out pornography. He tied her up when he raped her.

For the human brain, exposure is critical. Research has shown that a significant percentage of baby boomers in Nigeria had first contact with sex education through pornography (Dauda the sexy guy aka Nackson, Ikebe Super, Bembela and Lulu, playboy etc.) or peer conversations. This means that the risk of continued rape is higher today due to the poor quality of sex education and the increased availability of the internet than ever.

Nigeria currently enjoys 65.1% internet penetration with about 92.3 to 96 million users of which a significant portion are young adults.  This means that without active intervention, young adults are more likely to learn about sex from high-speed internet pornography considering the easy access than from sex educators or parental conversation. And with this exposure comes a search for unhealthy novelty and sexual content which in-turn raises the number of rape cases, PTSD, anxiety, depression and potentially suicide.

Every burst of dopamine rewires the brain and negatively impacts the frontal lobe, and at every stage the crave for novelty changes and it is only a matter of time before the user begins to prefer sadomasochistic contents seeking to act it out with and/or without consent.

We need to redefine the word BREAK-UP

How to survive obscurity with consistency

One of the reasons why you lack boundaries is because…

Here is why you date people you should dodge