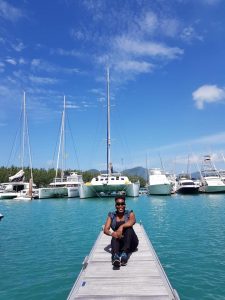 I love travelling because it furnishes me with retreats and surrender. No performance. No expectations. Just my soul walking down the streets to relish the beauty of life. A life I am determined to immortalize my peace.

My introverted genius also dominates my extroversion at recess. It shuts out voices to midwife my soul. It ensures I pitch my tent in the moments. No calls, emails or engagements with energy vandals.

Seychelles offered me a beautiful scenery.
An archipelago of 115 Islands in the Indian Ocean, off East Africa. It’s home to numerous beaches, coral reefs, nature animals as well as rare animals like giant Aldabra tortoises. A city with just 95,000 humans ( less than the number of citizens in Lekki phase 1, Lagos / has the smallest population of any sovereign African country) spread across 115 Islands but with 3 main Islands in Mahe (82,000 people), Praslin (7,000) and Ladigue (6,000).

Seychelles boasts of the highest nominal per capita GDP in Africa. Their source of GDP is Tourism and Fish (anything water-related actually) but despite the country’s newfound economic prosperity, poverty and a high level of economic inequality remains widespread, with one of the highest unequal wealth distribution among the upper and ruling class commanding a vast proportion of the country’s wealth. Their three official languages are English, French and Seychellois Creole.

We visited the Botanical Garden. Had launch at the Monumental Marie Antoinette Restaurant, visited the Takamaka rum shack where they produce their indigenous wine and the marine park / reef safari where I almost died during snorkelling.

Snorkelling is the practice of swimming on or through a body of water while equipped with a life jacket, diving mask, a shaped breathing tube called a snorkel, and swimfins. I descended slowly into the water in my full kit. After what looked like a few seconds in the ocean, my system one kicked in ( if you don’t what this means then you need to attend Emotions City). My feet couldn’t touch the ground ( in an ocean o) and I started panicking. I mean I totally forgot I could swim to save my life. I screamed out for help and I was saved. Few minutes after, I was back in the same ocean to swim in and with the help of the lifeguard. I stepped out and stepped back in the third time to enjoy my life in the same ocean that threatened my existence. 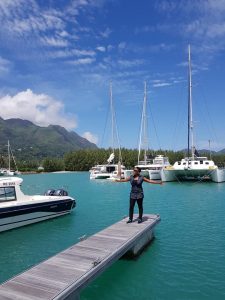 We left the ocean for the beach afterwards where I participated in a swimming competition. Interestingly I won the competition ( I still don’t know how though) even though I competed against human dolphins.

When I got to my hotel, I ruminated on my near-drowning experience. I interviewed my intellect on why I experienced an amygdala hijack despite the fact that I had a life jacket on. I wondered if there were other areas of my life I was freaking out in the absence of safety. Fear retarded my competence.

What area of your life is fear strangling your competence? Step into the Ocean. The difference between you and the god of your industry may be confidence.

P: S – Have joined my exclusive tribe? A gathering of high network professionals who desire to make more money and more Impact in 2020?

These set of people will also have access to 12 free coaching and therapy sessions with me. To be a part of this, pls click

Announcing a change of name

One of the fundamentals BADLY BEHAVED people depend on is …

Once Upon a Time

Me are NOT ready to live in the society they are creating.